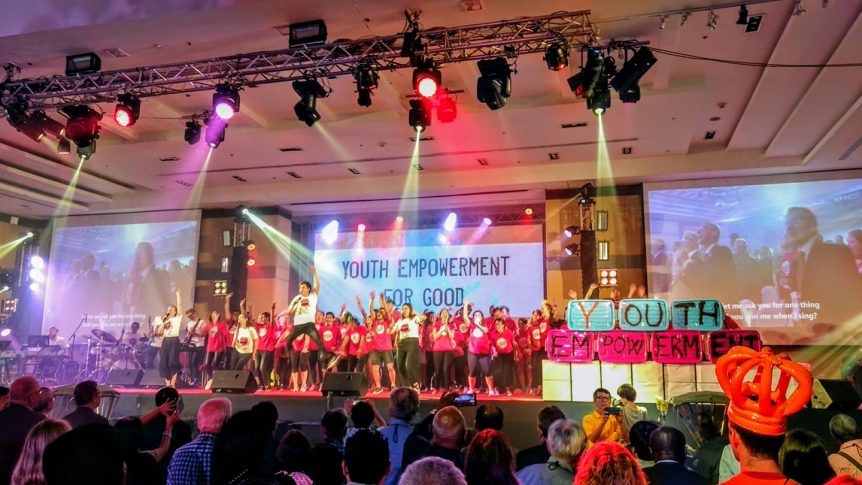 Is this a festival or a global conference? Or is it both?

Last night the 19th World Council in Chiang Mai officially opened in fabulous and dazzling style. A big shout out to the YMCA representative from Netherlands who wore an orange suit and oversized glasses.

It was extremely exciting seeing all of the countries from across the globe – over 80 of them – being welcomed. Did anyone else feel like it was a bit like the Olympics? The excitement of being here felt contagious.

Before the opening ceremony I spoke to some delegates about what they were looking forward to the most and what they had experienced so far.

“It’s feel like day 2 or 3 of any other program. You have an instant connection with people,” Della, YMCA Australia said.

“I want to see the new Change Agents and the old ones as well. The new ones are important because there will be more new countries with different perspectives on issues. I am looking forward to us doing more in equality and human rights. We need to be all inclusive.” Patrice and Katie from YMCA Czech Republic said.

“I don’t have any expectations. I just want to learn as much as I can. One Million Voices research showed us that people don’t know about the YMCA and brand awareness is crucial. So I want to learn more about that and also how we can be more progressive.” Vasil from YMCA Macedonia said.

During the opening ceremony YMCA President Peter Posner announced the key functions of the World Council to be:

• Meeting the future (what will the YMCA be like in 2044, this should be your focus)
• Shaking hands with the future (by voting for the future strategy)
• Governing for good

History is made at World Councils. At the 18th World Council a decision was made to have 700 change agents trained by 2018. This has been a huge success and was achieved. What will the 19th World Council achieve? Time will tell but we know that we will continue to invest in youth empowerment for good.

The opening ceremony also welcomed new YMCA members Cameroon, Mongolia and El Salvador and we also congratulated the new incoming World YMCA Secretary General Carlos Sanvee.
Today we will continue to meet others and learn about how we can come together as one YMCA. There will be a lot of information in the next week, which is why group meetings will be an important place to discuss and unpack some of the tougher and challenging ideas.